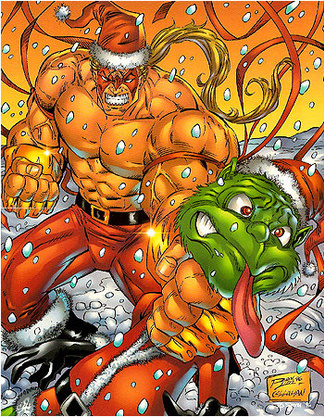 "Merry Christmas to all! Now you're all gonna die!"
"Oh, did you have to? 'No turning back'? That's almost as bad as 'nothing could possibly go wrong' or 'this is gonna be the best Christmas Walford's ever had'."
— The Doctor (alluding to EastEnders), Doctor Who, "The Impossible Planet"
Advertisement:

A Darker and Edgier version of Christmas in a work, for added irony.

Christmas being the biggest celebration of love, family, and happiness, it can further increase a single character's personal misery if he experiences totally opposite emotions.

In extreme cases, this can mean death, torture, rape, and more death. In shows with more everyday themes, it might be loneliness, failed relationships, and depression.

Sometimes this doesn't just affect one person but everyone. British Soap operas in particular have a reputation for making Christmas a time of death, divorce, infidelity, and violence, which explains why some of them have their own sections below. At least one person will end up dying, getting knocked down, or crying all alone on the happiest day of the year and almost always with a carol or jolly Christmas song over these images just to hammer it home. Maybe somebody's house will go down in flames. Maybe somebody's Genre Blind enough to actually get married. That's the Spirit of Christmas for you. In general, Foils, Keets and other comic relief characters can rest well knowing that they're not likely to die and will get to celebrate Christmas as it should be, but there's still a chance of them getting traumatised in time for Christmas dinner. Or during Christmas dinner.

In Doylist terms, this isn't necessarily done just to be depressing and cynical for the sake of it: it's also done so audience members whose own Christmases are miserable in unremarkable ways can have the satisfaction of knowing that someone else's Christmas is even worse than theirs. Having to be hospitable to relatives you resent, graciously receiving presents you neither need nor want, and the inevitable mountain of leftover turkey will feel like lenience by the closing credits.

Snow Means Death is a frequently used motif in such settings. Bad Santa and An Ass-Kicking Christmas are more humorous/badass takes on the concept. The Christmas section of Horror Doesn't Settle for Simple Tuesday has some of the most brutal examples. To fit the theme, the score for tense or scary moments may involve Chaos of the Bells. Crappy Holidays is a downplayed version; characters aren't in any danger but aren't having any fun either. See also Anti-Christmas Song, Did I Mention It's Christmas? and Do They Know It's Christmas Time?.