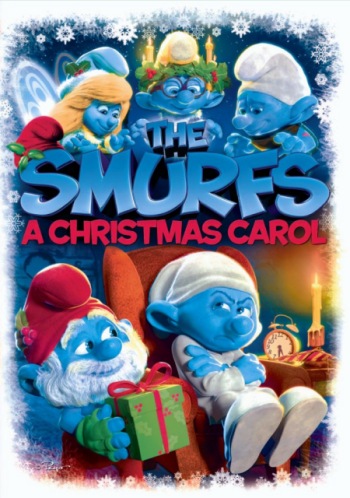 The Smurfs: A Christmas Carol is a 22-minute Christmas Special featuring The Smurfs that is co-produced by Sony Pictures Animation and Duck Studios. It was first released as part of the 3-disc DVD / Blu-ray combo pack of The Smurfs, and is available on its own DVD as well. It features the voice talents of George Lopez, Fred Armisen, Anton Yelchin, Gary Basaraba, Hank Azaria, and Frank Welker from the film series, with Jack Angel as Papa Smurf and Melissa Sturm as Smurfette.

It is now followed by The Smurfs: The Legend of Smurfy Hollow.

This animated feature provides examples of: