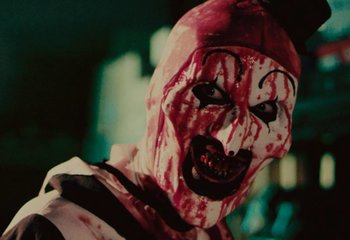 Art the Clown is a murderous, sadistic Monster Clown featured in multiple short and feature-length films directed by Damien Leone. Making his debut as a minor character in the short film The 9th Circle, Art, played by the now-retired Mike Gianelli, where he torments a young woman at a subway station before drugging her and giving her to a witch coven. He was met with critical acclaim, and Leone released a 30-minute short film called Terrifier, which features Art as the Big Bad, chasing after a woman who witnessed one of his murders. Between these two shorts, another one — Tortures of the Damned — was planned, but never finished.

Later, Leone compiled the two shorts into his first feature-length film, All Hallows' Eve, featuring the shorts as segments on a videotape, along with a bizarre and out-of-place segment involving an alien invading a woman's house that just happens to have a painting of Art at the very end. Another feature-length film based on and named after The 9th Circle was also in the making, but later scrapped. Years later, after Gianelli retired from acting, Leone went on to cast David Howard Thornton in the role of Art for Terrifier.

The franchise so far: