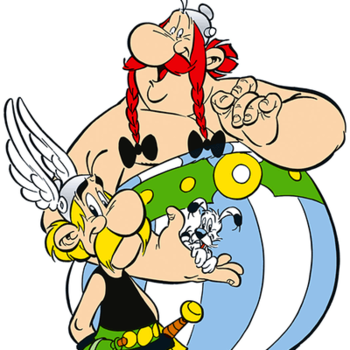 Astérix is a character created by René Goscinny and Albert Uderzo in 1959 for the French comic magazine Pilote. The series' growing success in Pilote got it published into albums soon after.

The year is 50 B.C. Gaul is entirely occupied by the Romans. Well, not entirely... One small village of indomitable Gauls still holds out against the invaders. Said village is the home of Astérix, who frequently goes on all kinds of adventures, often in order to foil the plans of the Romans. He is helped in his adventures by Getafix, the druid of the village who holds the secret of a Super Strength-inducing potion, and most importantly his best friend Obelix, a menhir carver who fell in a cauldron of the aforementioned potion when he was a child, making the effects permanent on him.

Since its creation, Astérix has become a prominent figure in French-Belgian culture, and has managed to acquire fame on an international level, a rare occurrence for a French-Belgian comic character. It has been translated in over a hundred languages, and the comic book series, currently 37 albums long, has been adapted into animated features, live-action movies, video games, theme parks, tabletop games and whatnot. It also notoriously features on mustard glasses.