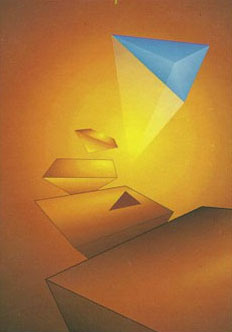 Alpha Waves (released as Continuum in North America) is perhaps the first 3D Platform Game (if one doesn't count I, Robot), predating Super Mario 64 by 6 years. Designed by Christophe de Dinechin and published by Infogrames in 1990. The game was released for the Atari ST, Amiga, and DOS. The player controls a small object called a "Mover" that bounces on trampolines and travels through cube shaped rooms connected by little doors. There are two game modes: Emotion, a single-player only mode with no time limit, and Action, a timed game for up to two players.