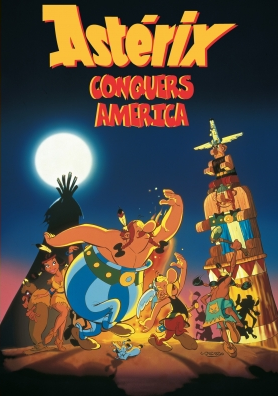 Asterix Conquers America (French: Astérix et les Indiens; German: Asterix in Amerika) is a 1994 French and German animated film directed by Gerhard Hahn. It is the first (and to this day, only) Asterix film not to be made in a French-speaking country, and loosely adapts the comic book Asterix and the Great Crossing. Two songs of the film were performed by the French band Zouk Machine. Asterix is voiced by Roger Carel in French and by Craig Charles in English.

Circa 50 BC, Julius Caesar has had enough when yet another of his Roman legions is smashed to pieces by that one indomitable Gaulish village because of the magic potion of their druid Getafix, so he decides to tackle the problem at the root before conspiratorial senators exploit his humiliation. He orders his sycophant Lucullus to capture the druid (who they believe to be immortal) and throw him over the edge of the world (which they believe to be flat as a pizza).

Lucullus kidnaps both Getafix and Obelix's pet dog Dogmatix and sets sail on the Atlantic ocean, with Asterix and Obelix chasing them. Following a storm, Asterix, Obelix, Dogmatix and Getafix think they have reached the edge of the world... only to find out they have landed in a strange and beautiful new world. They meet and end up befriending a tribe of Natives (believing to be in India), and soon antagonize the tribe's evil medicine man. Meanwhile in Gaul, Caesar now sees his chance to overrun the village, and besieges it.