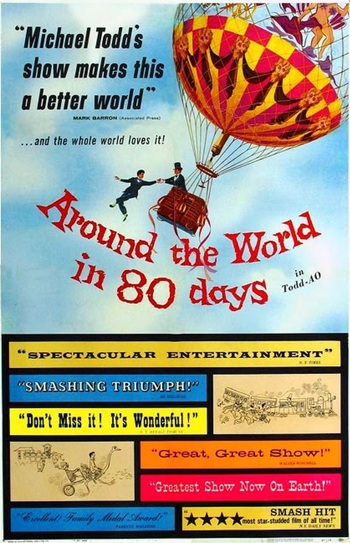 Around the World in 80 Days (sometimes spelled as Around the World in Eighty Days) is a 1956 film produced by the Michael Todd Company and released by United Artists, starring David Niven, Cantinflas, Shirley MacLaine, Robert Newton, and an All-Star Cast of cameo actors.

The epic picture was directed by Michael Anderson and produced by Mike Todd, with Kevin McClory and William Cameron Menzies as associate producers. The screenplay was written by James Poe, John Farrow, and S. J. Perelman based on the classic novel of the same name by Jules Verne. The music score was composed by Victor Young, and the Todd-AO 70 mm cinematography was by Lionel Lindon. The seven-minute-long animated title sequence, shown at the end of the film, was created by award-winning designer Saul Bass.

The film won five Academy Awards, including Best Picture. It would also turn out to be one of the last films scored by Young, as he died less than one month later.

The 1956 film adaptation provides examples of: