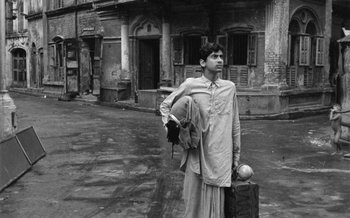 Aparajito (1956) is an Indian (specifically, Bengali) drama film directed by Satyajit Ray. It is the second film in the "Apu Trilogy", proceeded by Pather Panchali and followed by Apur Sansar.

Having left their village in Bengal at the end of Pather Panchali, young Apu and his parents, father Harihar and mother Sarbajaya are now living in the city of Varanasi, by the Ganges River. Harihar has gotten a job as a priest and the family is doing OK—until Harihar catches a fever and suddenly dies. A widowed Sarbajaya is forced to work as a servant, struggling to survive and provide her intelligent son with an education.

Adapted from the last fifth of the novel Pather Panchali and the first third of the sequel Aparajito. The score is by Ravi Shankar.