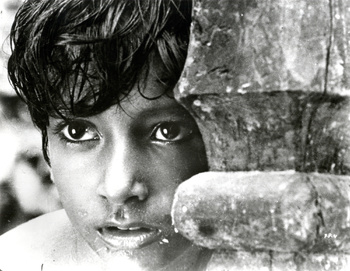 Pather Panchali ("Song of the Road") is a Bengali Bildungsroman by Bibhutibhushan Bandyopadhyay, originally published in India in 1929, during the time of The Raj. The author's first novel, it depicts the life of the impoverished Roy family in rural Bengal, seen through the eyes of youngest child Apu.

In the 1950s, it along with its sequel Aparajito became the basis for Satyajit Ray's critically acclaimed trio of films known as The Apu Trilogy. The film version of Aparajito covers Apu's adolescence and education, while series finale Apur Sansar follows Apu as a young adult.

The film adaption contains examples of: