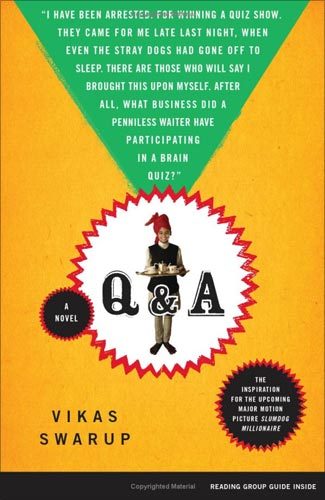 Well, wasn't I lucky they only asked those questions to which I knew the answers?
—Ram Mohammed Thomas
Advertisement:

Q & A is a novel written by Vikas Swarup, mostly known as the book that inspired Slumdog Millionaire. It follows Ram Mohammed Thomas, an Indian boy from the slums, as he manages to win a billion rupees on a TV game show.

The book primarily consists of a series of short story-like snapshots of Ram's life, detailing the circumstances that lead to his knowledge of the answer to each question. While the basic premise is the same as the movie, the events of his life are radically different, with only a few similarities. The story is told from his point of view, as he explains it to a benevolent lawyer who, unlike the police, believes that he didn't cheat.