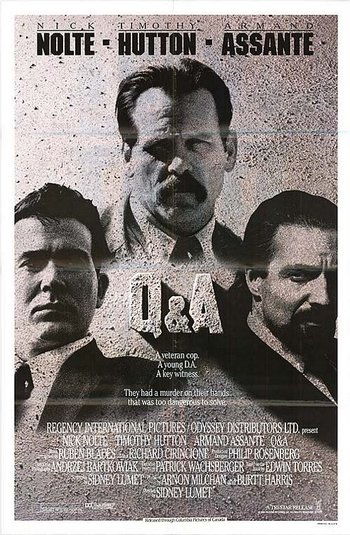 Q & A is a 1990 crime film directed by Sidney Lumet and starring Nick Nolte, Timothy Hutton and Armand Assante. It is based on the novel by New York Supreme Court Judge Edwin Torres.

Detective Mike Breenan is a tough and crude, but decorated New York City Police Department detective lieutenant with a dark side and ties to organized crime. He ends up killing a small-time Puerto Rican crook and threatens the witnesses to say it was self-defense. Young district attorney Al Reilly is sent to handle the case to get the inquiry behind the shooting. His case leads him to a crime boss, "Bobby Tex" Texador, whose wife is Nancy Bosch, the former lover of Reilly. The whole case leads to a violent struggle between the three men.