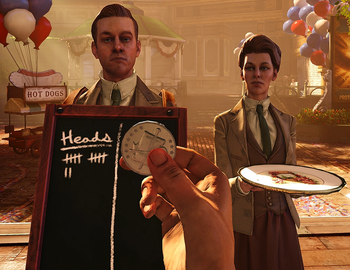 What's the most you ever lost on a coin toss?
"The random toss: the only true justice. Let's see what justice has in store... for you!"
— Two-Face, Batman Forever
Advertisement:

Alice needs to decide between buying a strawberry cake or an apple cake, but she really can't make up her mind. So, she tries to decide by... flipping a coin. Heads, strawberry. Tails, apple.

Flipping coins to decide on an action has been a practice that, according to The Other Wiki, dates at least back to Ancient Rome. In fiction, it usually happens in the following situations:

Note that this trope can be used when deciding between two characters, things, or virtually anything. It can be a very common form of the Life-or-Death Question, due to that also being a very high-stakes binary choice.

A Born Lucky character will almost always get the result they want in this. A staple feature of The Gambler and The Trickster, who frequently settle their disputes this way. Occasionally a character will pick a course of action with a coin flip because he wants to prevent his enemies from figuring out what he'll do (that is, to counter I Know You Know I Know)—they can't predict it if he doesn't know himself. Cheaters tend to use a Two-Headed Coin. Heads, Tails, Edge is a subtrope. Heads I Win, Tails You Lose does not necessarily involve a coin flip but is derived from this terminology.

In technical terms, such play is a Bernoulli trial

, which describes any random experiment with exactly two outcomes. Note too that a coin toss is not exactly a 50/50 probability: barring the possibility of a trick flip (and yes, people can train themselves to make a coin land a certain way) and ignoring weight (typically the heads side is heavier resulting in a lopsided spin), a coin is more likely to land on the same side it was initially flipped from due to simple physics