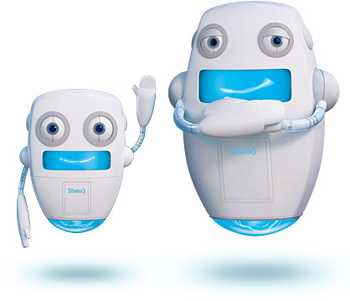 Shaw Communications is a Canadian cable company. In 2012 they introduced a campaign where anthropomorphized robots carry packets of data through their fibre optic network at light speed. The ads focus on Bit and Bud, a Student–Master Team, who are among the many delivery bots who serve Shaw's customers.
Advertisement:

Bit is the young, intrepid bot, while Bot is the larger, more experienced bot. Bot generally works to guide Bit, who usually engages in various antics.

A playlist of the commercials