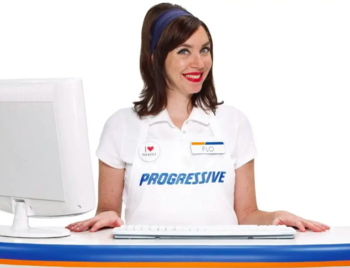 Progressive is an American insurance company known for their television commercials, which often star an enthusiastic, quirky saleswoman named Flo (played by Groundlings

alumna Stephanie Courtney) and her group of friends, who all like to explain the benefits of Progressive's insurance and the products it comes with, such as the Name Your Price tool. Besides Flo, there are several other recurring characters, most notably Jamie, Flo's well-meaning but incompetent assisstant, Mara, a sarcastic employee who is uninterested in her job, Alan, and Flo's family (all played by Courtney in various makeup jobs), who are all annoyed at her constant mentions of Progressive and its insurance policies.

Not all of Progressive's commercials feature Flo and her friends; there have been other characters featured in these ads, too. For example, in 2012, they introduced an anthropomorphic Auto Insurance Box (voiced by Chris Parnell) representing the company's products as another mascot. There's also the Sign Spinner ads, which focus on a Progressive sign spinner and the various everyday situations he gets into. In 2020, they introduced their "Dr. Rick" campaign, focusing on a "Parenta-Life Coach" named Dr. Rick who prevents new homeowners from becoming their parents, and the various methods he uses to do so. And then there's the NFL-centric "At Home with Baker Mayfield", with the various antics of the Cleveland Browns quarterback as he tends his "home" of the Browns' stadium. Flo is their most well-known and most often used mascot, however.

This Progressive commercial parodies the idea of making an ice show out of a beloved property... not that it's stopping people from wishing it was real.

Example of:
On Ice

This Progressive commercial parodies the idea of making an ice show out of a beloved property... not that it's stopping people from wishing it was real.