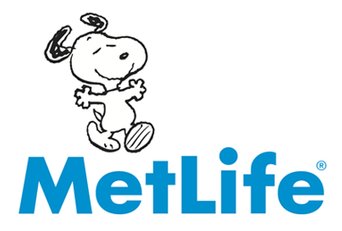 "Get Met. It pays."
Advertisement:

In 1985, the insurance company Metropolitan Life, often shortened to either Met Life or MetLife, began featuring the characters from Peanuts in a series of commercials in an effort to appear more approachable during a time when insurance companies were thought to be "cold and distant."

Most of these ads featured Snoopy in the role of the "world-famous MetLife representative," helping the other characters with various insurance-related needs. The commercials played off several iconic Running Gags from the comic strip and its adaptations, such as Lucy pulling away the football, Snoopy opposing the Red Baron, or Linus' dependency on his Security Blanket. Later commercials had the characters discuss healthy living to promote MetLife's health education programs.

This campaign extended beyond the commercials to include the Peanuts characters in premium items, sales literature, and even the MetLife sports blimps "Snoopy 1" and "Snoopy 2." In 2002, MetLife signed an exclusive contract that granted them the rights to continue using Peanuts in their advertising materials, which became an international contract in 2006.

In 2016, as part of a shift away from consumer insurance in favor of corporate clients, MetLife ended its partnership with Peanuts and rebranded to remove Peanuts imagery.

Tropes seen in the campaign include: