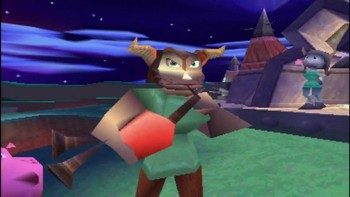 Bagpipes are fantastic instruments—if you know how to play them. Hearing somebody unskilled learning to play bagpipes, though, is just as painful as media makes it out to be. Also, a lot less painful outdoors than inside, as they are also quite loud. How loud? Well, if the wind is in the right direction and you listen a bit, you can hear the buskers on Edinburgh's Royal Mile from a couple of miles away. Since the original bagpipes, as well as the modern Great Highland Bagpipe originally were signaling instruments, meant to be heard over the sounds of a couple thousand dudes banging at each other with bits of metal, one can argue that this is the point. Other types of bagpipes have different, less screechy sounds.

The origins of the Great Highland Bagpipe are Shrouded in Myth. The oldest known fragment of a Great Highland Bagpipe is a remnant of a set alleged played by Clan Menzies at the Battle of Bannockburn, but this claim is disputed. The earliest concrete evidence for the use of bagpipes is a written account of the Battle of the North Inch of Perth (or Battle of the Clans), which mentions the use of "warpipes". The first example of a specifically "highland" version appears in the 1549 work The Complaynt of Scotland. It is a persistent but untrue myth that the bagpipes were banned by the Act of Proscription 1746. Both persecution by Government forces and mass emigration/deportation to British colonies during the following decades led to a decline in the instrument, but the discovery that Highlanders made excellent shock troops led to a revival. Pipes were carried into combat during the Battle of Assaye, the The Duke of Wellington's first independent command, where he destroyed a European-trained Maharatha army nearly seven times his numbers. Throughout the 19th century, pipers were a common feature of Scottish attacks. In World War I, the pipes were used early on, but heavy casualties led to the end of the practice. Daniel Laidlaw won the Victoria Cross for piping his faltering company out a trench during a German gas attack during the Battle of Loos. War piping made a brief revival during D-Day, when William Millin piped the 1 Special Service Brigade onto Sword Beach. The last use of bagpipes during a combat situation in the British Army was during the 1967 Aden Emergency, where the 1st Btn Argyll and Sutherland Highlanders occupied the Crater district of Aden without a single casualty, something High Command thought impossible.

Though there are many kinds of bagpipes used in traditional music throughout Europe, North Africa and the Caucasus, in fiction you almost never see anything but the Great Highland Bagpipe; just take a look at The Other Wiki on the subject.

They have a nifty list of songs with bagpipes as well.

Most often used for a Regional Riff of Scotland. Also see Loud of War. Amazing Freaking Grace is an extremely popular tune to be played on the pipes, as is Scotland The Brave

; for non-Scottish, these are often the only tunes ever heard played on this instrument, in fact.

The arrival of House Atreides at planet Arrakis is heralded by a bagpiper. It is followed then by the entire soundtrack begin composed by a bagpipe band.

The arrival of House Atreides at planet Arrakis is heralded by a bagpiper. It is followed then by the entire soundtrack begin composed by a bagpipe band.