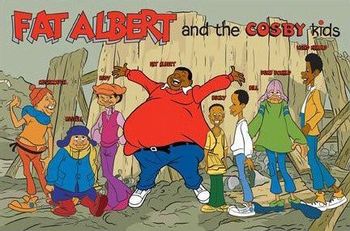 "This is Bill Cosby coming at you with music and fun, and if you're not careful, you may learn something before it's done. So let's get ready, okay? Hey, hey, hey!"
Advertisement:

Bill Cosby created this Filmation series, based on his boyhood in Philadelphia (and, more directly, on his Stand-Up Comedy routines of the 1960s, like I Started Out as a Child). Cosby also appeared on camera as a live-action Narrator and performed some of the character voices, including Fat Albert himself. The show ran Saturday mornings on CBS from 1972 to 1984, followed by one additional season in first-run syndication. There were also prime-time specials for Halloween, Christmas (both 1977), and Easter (1982). In addition to a good income and setting up a ready audience for The Cosby Show to rule the airwaves in the 1980s, Cosby also used this series to earn a Doctorate in Education, and become Dr. Cosby.

In every episode, Fat Albert and his inner-city gang became involved in some comic misadventure, either learning a moral lesson or demonstrating a lesson for someone else. As on The Archie Show, every Fat Albert episode included at least one song. In later seasons, Fat Albert and his friends followed the exploits of their favorite TV superhero, the Brown Hornet, who had adventures with morals that typically paralleled the main story. The first-run syndicated episodes had "Legal Eagle," a Funny Animal parable told by Mudfoot to serve the same story purpose.

At Christmas 2004, 20th Century Fox released a live-action Fat Albert feature film starring Kenan Thompson note The same Kenan Thompson who was on All That, Kenan & Kel, and currently Saturday Night Live in which the cast of the Fat Albert cartoon step out of the TV to make a little girl's life better. It wasn't well received by critics and the box office.

In January 2013, Cosby announced on his Facebook page that a new version of Fat Albert is being developed. As of yet, it has not surfaced, and with the subsequent controversy regarding Cosby's sexual conduct, it probably never will.

A character page is in the works.