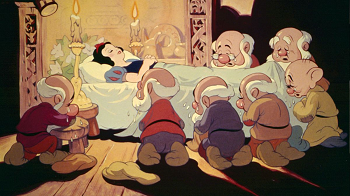 Everybody had to cry. Not a single eye was dry.
— Madeline
Advertisement:

They say when you cry, you cry alone. Well, sometimes that's not always the case.

Everybody Cries is where a group of three or more characters (sometimes all the main characters) cry in the same area, whether in one scene or a sequence of scenes. The reasons can vary, but the most common is the loss of someone that everyone in that scene or everyone on the show, cared for a lot.

For this to work, all the characters have to be crying the same way (small crying sounds or out right bawling; either one works) and/or have tears flowing down the cheeks, not just held within the eyes (or, at least, wiping them from their eyes). And if everyone is Cry Laughing, it is not this trope.

Don't be surprised that you start crying while watching this sort of scene.

Also, even though it includes the titular trope in its lyrics, "Everybody Hurts" by R.E.M. isn't an example (it's about how You Are Not Alone).