Photo Op with the Dog 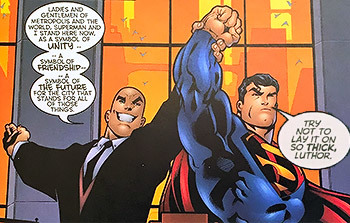 It apparently doesn't matter whether the dog's happy about it or not...
"And our little girl Tricia, the six-year-old named it Checkers. And you know, the kids, like all kids, love the dog and I just want to say this right now, that regardless of what they say about it, we're gonna keep it."
— Richard Nixon
Advertisement:

This is when a character makes a huge show of the petting act, in order to help the character's image. The act can sometimes be faked, but usually it's genuine, even if it's a meager act. In some circumstances, the character receiving it might find the act patronizing regardless of intention.

Can involve a literal photo op, but not always. One such way can be instead Helping Granny Cross the Street. The point is trying to make the character look good.

If this is a Villain with Good Publicity, this is of course one of the ways they have that good publicity.

If this is a Hero with Bad Publicity, it's usually an attempt to change their image, but it's rarely ever successful.

A subtrope of Pet the Dog and Sister Trope to We Care, Politicians Kiss Babies. Contrast What You Are in the Dark. It may overlap with Rich Kid Turned Social Activist. Can also be a form of Go-Karting with Bowser if the person really wants to cherish this moment.