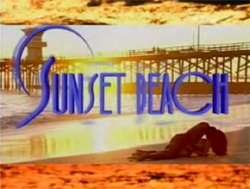 The craziest soap on the box.
Advertisement:

Sunset Beach was an American Soap Opera produced by Aaron Spelling. It ran just shy of 3 years on NBC, airing from January 6, 1997 to December 31, 1999.

Redneck ingenue Meg Cummings (Susan Ward) discovers that her fiancé is sleeping with a bridesmaid, packs her bags and moves west. Meg is not entirely guiltless, as she's in an online relationship with another man. The mystery man turns out to be Ben Evans (Clive Robertson), a mover and shaker in Sunset Beach, California. At first, Meg finds Ben to be withdrawn and unsociable—which she later discovers is due to his wife's death in a sailing accident. Meg has a rival in Ben's childhood friend, Annie Douglas (Sarah G. Buxton), who teams up with Meg's ex to split the spoils.

Another plotline revolves around the Richards family. The patriarch, Gregory Richards (Sam Behrens), is a white-collar criminal who owns much of the town. His wife Olivia (Lesley-Anne Down) is a secret drunk who is rarely allowed out in public. Their daughter Caitlin (Vanessa Dorman, later Kam Heskin) is involved with Cole Deschanel (Eddie Cibrian), an ex-jewel thief whom Gregory hates, and who sleeps with Olivia without realizing her connection to Caitlin. The Richards storyline was more compelling and had better acting, so it grew to dominate the show.

The third plotline involves a lifeguard, Michael (Jason Winston-George), who later became a sports physician. He strikes up a romance with Vanessa (Sherri Saum), a journalist at the newspaper. Their relationship is jeopardized by Virginia (Dominique Jennings), who defies soap convention by being both black and a single mom. Virginia's plan rests on an exotic, disfiguring disease which was supposedly passed down to Vanessa by her estranged mother.

Other notable characters include: Olivia's friend Bette (Kathleen Noone), dispenser of town gossip; Ben's brother-in-law, Detective Ricardo Torres (Hank Cheyne), who suspects his sister's drowning was no accident; Madame Carmen (Margarita Cordova), she of the Tarot cards; Francesca (Lisa Guerrero), who figures into a year-long "Who Shot X" storyline; and Casey, a nondescript muscle-man.

SB had a large fandom in the United Kingdom during its heyday, a surprise considering how daytime (as opposed to prime time) TV historically has a hard time in the UK. Such was its popularity over there that petitions were sent to the UK broadcaster (Channel 5) begging them to have it uncancelled.

Tropes featured in the show:

open/close all folders
A
B
C
D-M
N-Z