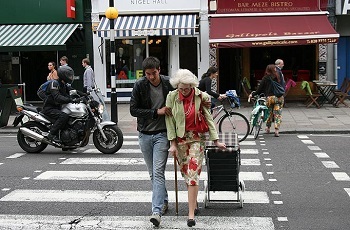 Whenever a character wants to be good (or, perhaps, only appear good), he or she will often resort to public acts of kindness to random strangers. Upon seeing a frail little old lady standing on the side of the road, our "hero" will naturally try to help her get to the other side, usually without asking her if she wanted the help or not. If the character is particularly strong, they will often pick the poor granny up and just carry her across, especially if they are in a hurry.

Usually, this ends with the old lady complaining that she never wanted to cross the street in the first place, but our "hero" has usually rushed off to do some other heroic deed by then. Other times if it does benefit the old lady somehow, she’ll end up being dumbfounded before continuing their business. If the old lady is a particularly crabby one, she will usually give her helper a biff with her walking stick or handbag.

This sort of behavior is common among Boy Scouts, or their fictional equivalents.

The straight example of the "helping the old lady across the street" bit has pretty much become a Dead Horse Trope these days (unless it is the person’s grandma), which is why the only examples you'll see in modern media involve the subversion of the old lady never wanting to cross in the first place, or crankily belting the hero with their cane or handbag, or the person impatiently deciding to rush them to the other side if they’re taking too long to cross. It can also be a stock excuse, especially among villainous types who are late.