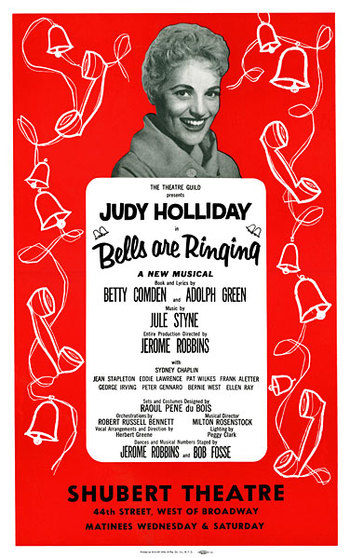 Bells are Ringing is a 1956 musical written by Comden and Green, with music by Jule Styne.

The town is New York, and the time is the 1950s, when the cha-cha is the hottest dance craze and many people subscribe to telephone answering services such as Susanswerphone. Among the people whose phones connect to Susanswerphone's switchboard are:

One might expect that, to serve such a wide variety of clients, Susanswerphone would need a "vast personnel of well-trained girls," as an advertisement for them says. In fact, three girls, including the owner, Sue Summers, handle all the calls, but Ella Peterson is skilled at finding a different voice to answer each of their subscribers. Sue complains that Ella's a bit too friendly with the subscribers, especially after a couple of misguided policemen open an investigation. But the threat of being sent to the Women's Detention Home does nothing to deter Ella from starting an affair with Mr. Moss, her Sleeping Prince, under the pseudonym Melisande Scott.

, who would go to extreme lengths to help her clients, far beyond just answering the phone. The musical was conceived as a star vehicle for Judy Holliday, who also appeared in a film version released in 1960, with Dean Martin as Jeffrey Moss. This film version, directed by Vincente Minnelli, was the last of the many movie musicals produced for MGM by Arthur Freed.