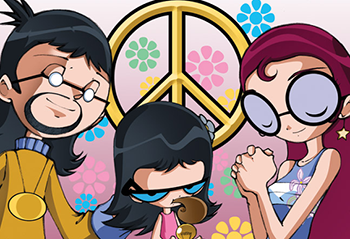 I tell you, life ain't easy for a boy named Sue.
Advertisement:

The '60s and The '70s are far back enough now that a lot of those people who were living the hippie lifestyle are now parents or even grandparents, so you can bet that they show up a lot in fiction.

They are pretty easy to spot: they usually live in a house with astonishingly orange and brown decor ripped directly from the 1970s even though they live in the early 2000s, enjoy cannabis, use alternative medicine to varying degrees, still wear seventies clothes and sport '70s Hair, say things like 'groovy' and name their kids embarrassing things like 'Flower' or 'Rainbow', if not pop culture names like 'Galadriel' and 'Spock'. Expect someone to ask Who Names Their Kid "Dude"?

They often double as Amazingly Embarrassing Parents, and engage in Hands-Off Parenting. May or may not have once lived in a Hippie Commune, but they probably have some crazy stories that are bound to scar their children for life.

Compare Hippie Teacher. A subtrope of New-Age Retro Hippie and Bourgeois Bohemian. Contrast The Vietnam Vet Father, who usually grew up in a similar time period but went completely the other way about it.