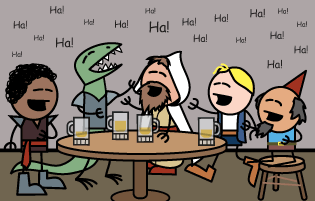 "It's not going to be entirely a dramatic film. Because we laughed there."
— A Trailer for Every Academy Award Winning Movie Ever
Advertisement:

Often a writer will feel the need to show that a group is getting on really well. One way to do this is to have them sit around over dinner or some other private social gathering and just talk, tell jokes and stories, and so on.

One common shorthand for this is to have the whole group sit or stand around, just laughing, often in a really over-the-top way and generally with no actual laughter heard (though it may fade in at the end just before somebody says something), while the camera pans about. This can be incorporated into a montage of clinking glasses and little snippets of conversation, but this trope is mainly about a slightly rarer variant where the group just sits around laughing hysterically at nothing. This generally comes over as extremely forced and may incorporate an "Oh, you!" hand gesture or two. The fact that we are, essentially, seeing a group of people pretending to split their sides at some joke we haven't heard at all, and are essentially falling out of their chairs with laughter, can be more than a bit unsettling or mood-breaking for some viewers, who wonder what could possibly be so funny. They may end up sardonically thinking, "What a funny table / hearth-rug / fireplace that must be!". Often ends with two people moving away from the group, possibly to the sofa or fireside, for some cheesy romantic pap-talk or a heart-to heart.

Note: This is not about people sitting around a table laughing at a joke, it's any group of people (sitting or standing) around laughing at NOTHING to which the audience is privy as a way of showing that they are getting on, particularly when it is very over the top.

Compare: Realistic Diction Is Unrealistic. Typically an example of Contagious Laughter and often a feature of the "Everybody Laughs" Ending. May be a result of a particularly Orphaned Punchline.