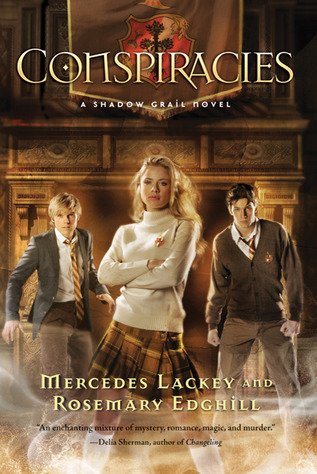 A series of novels following the adventures of Spirit White and her friends as they attend Oakhurst Academy by Mercedes Lackey and Rosemary Edghill.

The first book, Legacies, opens with the death of Spirit's parents and sister in a traffic accident. Spirit spends months recovering, where she is informed first that her house had burned down, and second that her parents had set up a trust fund for her and entrusted it to the Oakhurst Foundation. This means that Spirit will spend the time until she reaches the age of twenty-one at the Oakhurst Facility. Once her recovery is complete, she is transported to the Facility. Along the way, she meets Lachland Spears (or Loch as he prefers to go by), another orphan who has been entrusted to Oakhurst. The two discover that they were selected because they are "Legacies", children of former Oakhurst students.

Upon arriving at Oakhurst, Spirit and Loch discover that Oakhurst Academy is no ordinary orphanage/prep-school. It is, in fact, a Wizarding School, and a place to prepare the students for an upcoming wizard war. The two are tested for magical affinities. Loch finds minor gifts in the School of Air (Kenning and Shadewalking) and the School of Earth (Pathfinding). Spirit, however, appears to have no affinity, despite magical ability.

At Oakhurst, Spirit makes a group of friends, Burke Hallows, Muirin Shae, and Adelaide Lake (Addie), as well as maintaining her friendship with Loch.

However, Spirit begins to notice all is not well at Oakhurst. The school structure places an incredible pressure to compete on the students, to the point where friendship is all but openly discouraged. More disturbingly, students keep disappearing and never being heard from again...

In book two, Conspiracies, Spirit learns that the enemies which Oakhurst students must face may be closer than she has been told, and must convince her friends that the danger has not passed as they believe.

In book three, Sacrifices, Spirit and her friends know the enemy is at the school, and must do their best to avoid standing out and being detected. One of them goes undercover, but her acting skills might be fooling either side...

In book four, Victories, Spirit and her friends have escaped Oakhurst at great cost. But the Shadow Knights are still out there, and if they don't find a way to stop them within six weeks, the entire world is doomed.