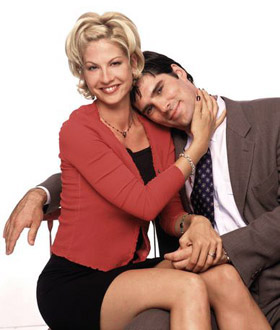 Dharma & Greg, naturally.
Greg: I wish that there was some way we could just skip the dating part.
Dharma: Why can't we?
Advertisement:

Freewheeling, eccentric nymph Dharma and laid-back, sensible lawyer Greg meet one morning, fall in love and marry later that afternoon. The rest of the show centers on this mismatched relationship, the wackiness of Dharma's (and now Greg's) life, and the reluctant attempts by Dharma's hippie parents and Greg's rich WASPish parents to get along.

Ran for five seasons (1997-2002), and was especially successful in its first three, but also critically divisive. Whether you responded to it or not depended on whether you thought Jenna Elfman's kooky antics were charmingly silly or hopelessly contrived. Dharma and her family believe in every possible aspect of several new age belief systems, bordering on Fantasy Kitchen Sink. Actor Thomas Gibson had little impact on the critical reception, since 99% of his job was playing the straight man to everybody else in the show — after the pilot, Greg instantly loses most of his quirky personality.

Years after the show ended, the couple had a Lawyer-Friendly Cameo on Two and a Half Mennote neither of the characters' names are said to avoid the issue of ownership rights and the dialog only broadly hints at their established backgrounds, bitter and on the brink of divorce. Given the amount of episode plots revolving around the couple role-playing in public, this should be taken with a grain of salt.

This show is notable for debuting the current brand of Chuck Lorre Vanity Plates, which can be found on ChuckLorre.com