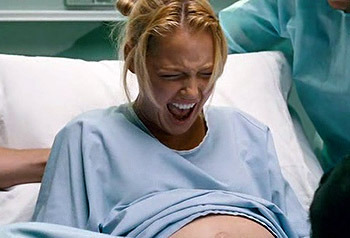 "Okay, maybe we can take it down just a little. I think you're gonna scare the other pregnant women."
New Age Midwife: Oh, I want Daphne to be awake and connected to the moment. A natural childbirth needn't be painful.
Roz: It needn't be, but it be.
— Frasier
Advertisement:

When a character is pregnant in a series, especially a sitcom, there will be the inevitable Screaming Birth.

Commonly, TV birth happens mere minutes after the water breaks, precipitating a mad rush (in a taxi) to the hospital, frantic calls to the doctor, and apoplexy (or better yet, a nice dramatic swoon) by the father-to-be. And for some reason, nobody ever decides to take an epidural. As seen in the above quote, the modern workaround for this is having the woman opt for a "natural," drug-free birth, often under the belief that giving birth is a natural part of being a woman she wants to fully experience. This line of logic usually only lasts until the first contraction hits.

The rest of the episode is spent with the pregnant character lying flat on her back (the hardest conventional position in which to give birth, but the easiest for doctors and cameras), in pain, sweating, crying, cursing out her husband/boyfriend/babydaddy ("You did this to me! You're never touching me again, you bastard!"), or screaming his name if he's not there, and in many cases, often suddenly developing near superhuman grip strength, being able to suddenly shatter every bone in the hand of any poor sap who to tells her to squeeze their hand to help with the pain. Eventually, she's able to push a kid out of her birth canal with all attendant drama— don't be surprised, though, if the writers throw in one last twist, such as Surprise Twins! This ends with a damp but otherwise perfectly clean (three-month old) baby being held by an exhausted but beatifically smiling mother and an ecstatic father or father-figure. Just don't expect to see the delivery of the afterbirth, or the stitching-up of any perineal tears, either of which would no doubt spoil the mood. You will occasionally see the cutting of the umbilical cord by the nervous father, always obscured from direct sight and often Played for Laughs.

The chances are good that the mother will be unable to make it to the hospital and will deliver anywhere she might find herself (note: Never take the elevator if you will be riding with a pregnant woman or are near-term yourself). Can be combined with Locked in a Freezer, where the pregnant woman is the "danger" and the other characters have to help her give birth.

Since the 1970s, this is usually preceded by a Lamaze Class earlier in the season.

In Real Life, Screaming Births can be Truth in Television, especially when there are complications, but it's often a self-fulfilling prophecy if a woman tenses up in anticipation. In any event, it generally isn't the birth, which is almost always the shortest part of the process, that is painful, and is done without medication at any rate. The painful part is the labor that precedes it, which can last anywhere from two hours to three days.