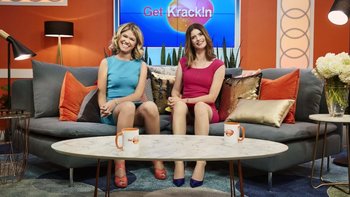 Behind those smiles are two very sleep-deprived women who are done with everyone's bullshit.
Get Krack!n is an Australian television series that parodies breakfast talk shows. It premiered in 2017 and is hosted by Kate McLennan and Kate McCartney, who previously worked together on The Katering Show.