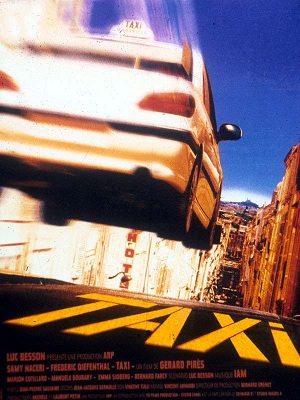 Taxi is a 1998 French action comedy movie written and produced by Luc Besson and directed by Gérard Pirès, and the first of a series of five.

The main protagonists are Daniel Morales (Samy Naceri), a Badass Driver from Marseille who quits his job as the city's fastest pizza delivery boy to become the city's fastest taxi driver with his tuned and souped-up Peugeot 406, and Émilien Coutant-Kerbalec (Frédéric Diefenthal), an eager but ditzy cop who has been trying and failing to get his driver's license for a long time. Émilien only manages to confiscate Daniel's license after the latter drove him through Marseille at 217km/h (135mph), who didn't know that the man on the backseat of his taxi is a cop. They end up as a team chasing a German gang of bank robbers driving Mercedes cars because Daniel knows more about fast cars than Émilien and can drive him around, and because he needs his license back.

Other notable characters in the movie are Daniel's girlfriend Lilly Bertineau (Marion Cotillard) who tries quite hard to spend intimate time with him (and who turns out to be the daughter of an army General in the second movie), Action Girl and German exchange cop Petra (Emma Sjöberg) for whom Emilien out of all people has the hots, and bumbling, chaotic Commissaire Gibert (Bernard Farcy) whose plans always fail spectacularly.

The movie's success spawned three direct sequels over nine years, Taxi 2 (2000), Taxi 3 (2003), and Taxi 4 (2007). All of them were directed by Gérard Krawczyk, who already directed some scenes in the first film when Gérard Pirès had health issues.

After a 11 years-long gap, Taxi 5 was released in France in April 2018 for the 20th anniversary of the franchise, with new leads, Franck Gastambide as police inspector Sylvain Marot and Malik Bentalha as Eddy Maklouf (Daniel's nephew). Samy Naceri and Frédéric Diefenthal did not return. Only Bernard Farcy and Édouard Montoute (from the previous movies' police cast) came back. Gastambide also directed it.

There is an Americanized remake from 2004, also titled Taxi.

The films have a character sheet.

The Taxi movies contain examples of: