Locked in a Freezer 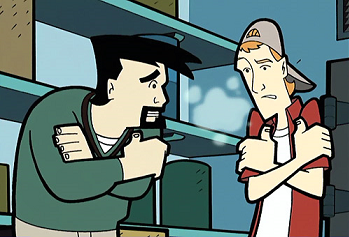 "Let's make sure, whatever we do, this never happens again."Note You know what this reminds me of? The last time we got locked in a freezer!
Pearl: I wanted to prove to you that everything could go back to normal.
Garnet: Catching Peridot won't make things go back to normal. This isn't about Peridot.
Amethyst: [looking at them through a camera] Hey, they're actually talking!
Steven: Now they can finally work things out!
[walls start closing in on Garnet and Pearl on the screen]
Amethyst: Not if they get crushed!
— Steven Universe, "Friend Ship"
Advertisement:

Two or more characters are locked in a walk-in freezer, meat locker, bank vault, or some other small, contained space where they're subjected to extreme cold, lack of oxygen, or both. Death is usually imminent. The characters talk a lot, often coming to a greater understanding of each other. Rescue comes in the nick of time. Sometimes.

Of course, in most places in real life such freezers have to be openable from the inside precisely to prevent this kind of thing from happening. The best treatments of this trope provide some explanation for why this isn't so. (e.g. The lock has been deliberately sabotaged in such way, the characters don't know how to open the door for some reason or there's something blocking the door on the outside, the characters are Bound and Gagged, etc.)

When not in normal use, many restaurant and hotel walk-in freezers are security-locked on the outside with a padlock and hasp to prevent against theft — not unreasonable as the contents can be worth tens of thousands of pounds. This may over-ride the safety release on the inside door. note Some designs have a glow in the dark wing-screw that is the hasp on the outside. Unscrew the wingnut, push the door, door opens without affecting padlock. While whoever locks up at night is legally expected to check first, there is potential scope here for dramatic potential. Workers dealing with walk-in freezers in Great Britain are legally entitled to a break every fifteen minutes at normal room temperature to guard against hypothermia...

When done deliberately, this is a kind of Death Trap.

Sometimes used as a Framing Device for a Clip Show, as parodied in the second (yes, second) episode of Clerks: The Animated Series. Also a good setup for a Bottle Episode, where the entire show takes place within that one room.

If the characters are locked in, but not in peril, they are simply Locked in a Room.

Sometimes used in conjunction with Snowed-In. One common variation is having all the characters go to a cabin, then having an avalanche trap them there. Since the peril takes place over a longer period of time, this usually allows for more Locked in a Room-style interpersonal interaction and Character Development. Another variation has the trapped characters being hostages in some sort of Sadistic Choice situation. Another, much more fun variation adds a pregnant woman and the inevitable Screaming Birth. This version usually takes place in an elevator, rather than a freezer. Sub-zero temperatures are not conducive to childbirth. Claustrophobia makes things interesting too. Another variation has trapped characters of the opposite sex warm each other with their bodies' heat, which leads to even greater understanding of each other.

Unrelated to Stuffed into the Fridge. Similar in ease-of-escape terms but opposite in temperature terms to Sauna of Death.