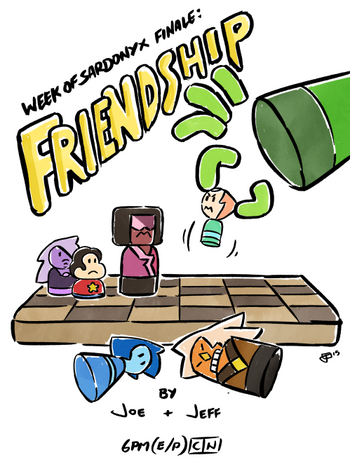 The Gems find Peridot at the Galaxy Warp. They prepare to attack her, but the overeager and desperate for forgiveness Pearl ruins it, resulting in Peridot getting away. They are later able to track her to an old, abandoned gem ship. They assume Peridot is using it to get away, but she actually has something different in mind. She knew the gems were tracking her (because Steven told her), and lured them to the ship to make use of its old but still somewhat functional traps. Nice job breaking it, Steven.
Advertisement:

The group attempt to make their way through the ship and to Peridot, but on their way there, Garnet and Pearl fall down a trapdoor into a small room (Amethyst saves herself and Steven with her whip). Garnet and Pearl are fine for the moment, but that won't be for long, as The Walls Are Closing In. While attempting to fight the deathtrap (with Steven and Amethyst helping by using her whip to halt the mechanism behind it for a while), Garnet and Pearl have a heart-to-heart about what happened.

Pearl apologizes for her mistakes, saying that she only did it because she wanted Garnet to forgive her. She reveals that she deceived Garnet to keep fusing because she is extremely insecure, and believes that as "just a Pearl" she'll never live up to Garnet's power, confidence, and composure. Fusing into Sardonyx is the only way she gets to feel that confidence.

Garnet responds that there is nothing Pearl can do to make Garnet forgive her for what she's done, and tells her that Garnet isn't the paragon of strength that Pearl thinks she is. The turmoil that Pearl caused by tricking Garnet caused Ruby and Sapphire to have their greatest argument in millennia. Garnet has problems and insecurities too, she just hides them better. In fact, sometimes she looks up to Pearl for strength.

After that, Amethyst's whip breaks, and the walls begin closing in again. There is only one way out, but Garnet and Pearl need to both agree on it. Cue the triumphant return of Sardonyx, drilling her way out of the room. The Crystal Gems then make it to Peridot, who immediately tries to bug out. Steven manages to hang on to her foot, but she detaches it and flies away, now with only one foot.

After spending a few episodes with Garnet being angry at Pearl for abusing their fusion as Sardonyx, the two gems reconcile, with each of them complimenting one another.

Example of:
You Are Better Than You Think You Are

After spending a few episodes with Garnet being angry at Pearl for abusing their fusion as Sardonyx, the two gems reconcile, with each of them complimenting one another.