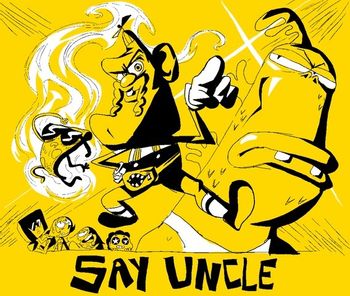 Uncle Grandpa: Don't worry, bro, none of this is canon. But THIS [cannon] is!

In this unusually] silly episode, Uncle Grandpa comes to town to aid Steven in unlocking the power of his mother's gem. Unfortunately, the Crystal Gems don't take kindly to this Reality Warper whose idea of "help" appears to be aiming all manner of guns at the boy, and decide he must be stopped. Hilarity Ensues.