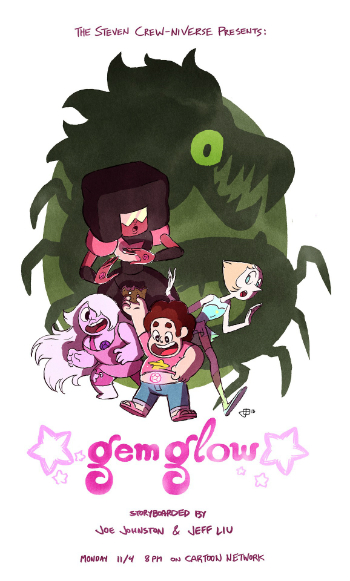 'Gem Glow' is the series premiere of Steven Universe, first airing on November 4, 2013.

Steven is extremely upset because they stopped making his favorite snack, Cookie Cats. Lars, one of the teens working at the Big Donut, theorizes (rather coldly) that the product was discontinued because of cutthroat competition from Lion Lickers (a product Steven despises because "they hardly look like lions"). Sadie, the other, nicer employee, gives him the empty Cookie Cat mini-fridge as a keepsake. When he gets home, he finds it invaded by centipede monsters, but the other Crystal Gems deal with them, though Garnet warns that their mother must be near.

Steven describes his sadness over the discontinuing of Cookie Cats and while wrestling a baby centipeetle away from the fridge, finds the freezer full of them! It turns out that on hearing that Steven's favorite snack was going away forever, the Gems felt obliged to do something about it. Amethyst stole the last few Cookie Cats for Steven (though Pearl went back and paid for them). Overjoyed by the Gems' display of affection for him, Steven's gem starts to glow, and when Steven sings the Cookie Cat jingle, he manifests a shield not unlike Captain America's. It ricochets around the room before destroying the TV. The Gems impart their individual wisdom to Steven on how to call his weapon. Pearl describes fractals and mathematical calculations in real time. Amethyst says she doesn't try at all; her weapon just shows when she wants it. Garnet describes becoming one with the cosmic forces of the universe. All of this kind of boggles Steven and leaves him no closer to unlocking his own method of summoning his Gem weapon. He ends up believing that eating Cookie Cats is what does it.

The house is then attacked by the giant Mother Centipeetle, and it traps the Gems on the beach. Steven tries to help, but the shield won't reappear. He even tries scarfing every last one of the Cookie Cats the Gems brought him in hopes of re-manifesting his shield. When the monster destroys the fridge, Steven angrily uses it to attack the Centipeetle and accidentally electrocutes the monster, giving the Gems a chance to finish it off. Only a gemstone is left behind.

The other Gems congratulate Steven and reassure him that someday, he'll fully manifest his power. Steven is tearful that not only are his Cookie Cats gone, but so is his only keepsake. To top that off, he has a sick tummy from having eaten too many.

We Iris Out over Steven as he vomits.