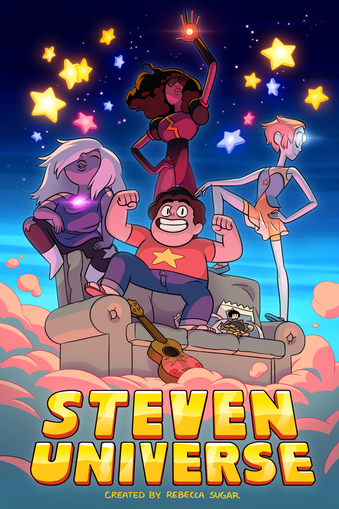 It's the pilot of Steven Universe, AKA "The Time Thing," originally called "The Electric Skull."

The Gems return from a mission with a defeated "electric skull" monster and a tiny hourglass in a sphere with time-travel powers. Steven wants to see the latter but the girls won't let him. They also laugh at the idea of allowing him to come along on their missions. However Amethyst slips the sphere to him along with some money for donuts.

When he goes to buy them, Lars, a guy who works at the shop, makes fun of him. Steven leaves angry and thinks of a comeback, then wishes he'd used it. Suddenly he finds himself back in time at the moment he was insulted, transported by the sphere, and uses his comeback successfully.

He goes home and tells the girls what happened, but they tell him that the device is now "stuck" and can only be used for... making comebacks. Additionally, the disruption in space-time brings the Electric Skull back to life!

Garnet snaps at Steven, then the girls battle the skull but it beats them with its hair-tendrils. Steven cries and suddenly thinks of a comeback for his Garnet's insult, and it brings him back in time right to the start of the battle. Now knowing what the monster will do, he tells them how to defeat it (using the donut shop sign to pin it down.)

Just as he's celebrating, Steven accidentally brings himself back in time yet again, this time to the moment the Gems laughed at him. He impulsively breaks the orb, then claims that he will save their lives anyway.

Note: The designs of some characters seen here are slightly different from what are used in the actual series. Rebecca Sugar has stated

the pilot is not canon to the main series.