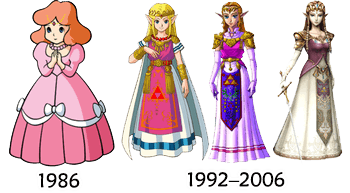 To be fair, these are all different people just named Zelda.
"Their design has been changed significantly from the last one you’ve likely seen. Now they’re much more anime, what with the white hair and everything."
— k25ff about Subject-000

Early in the series, any character is bound to have a characteristic look. It can go from Clothes Make the Legend, a Nice Hat, a particular hairstyle or whatever.

Some Webcomics use this as a Plot Point such as the characters changing classes (in a gaming webcomic), or the author, by some form of Art Evolution, removing the Limited Wardrobe trope from her/his arsenal.

A Sub-Trope of Early Installment Weirdness. A Sister Trope to Costume Evolution. Compare Art Evolution, Suddenly Blonde, and Iconic Sequel Outfit. Can be a part of Characterization Marches On if the design and characterization are connected. Inverted by some examples of Cosmetically Advanced Prequel, where a character or culture in a story set before their first appearance in publication/broadcast order is depicted with an appearance that they only took on later.