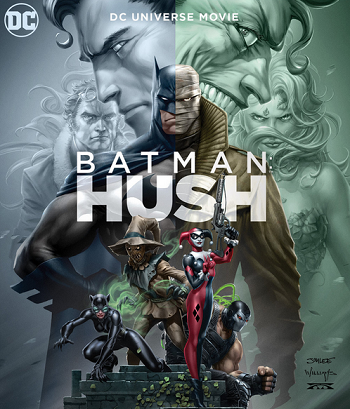 Batman: Hush is an animated film made by Warner Bros. as part of the DC Animated Movie Universe. It is an adaptation of the popular storyline created by Jeph Loeb and Jim Lee.
Advertisement:

Batman (Jason O'Mara) finds himself under attack by the mysterious bandage-faced adversary calling himself Hush (Geoffrey Arend). A villain who seems to know everything about the Dark Knight, Batman must run the gauntlet of some of his deadliest foes and figure out who this adversary is. At the same time, something seems to be blossoming between him and Catwoman (Jennifer Morrison)...

Tropes Featured in the Movie: