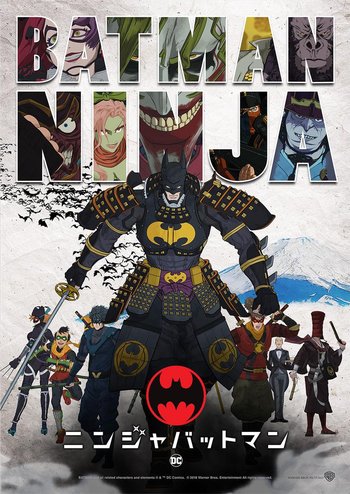 When Japan is in a state of chaos like a mass of hemp, a Ninja with a bat mask shall appear and restore order!
Advertisement:

A 2018 movie in the DC Universe Animated Original Movies line, Batman Ninja is a story of a time-displaced Batman in Feudal Japan, but with futuristic vehicles, airships, and guns. The plot concerns a group of classic villains that are trying to rewrite history while Batman and his allies are the only thing between them and their goal. It is notably only the second DC movie to be produced and developed in Japan, after 2008's Batman: Gotham Knight, and the first to be made in CGI.

The voice cast for the English dub includes Roger Craig Smith reprising his Batman: Arkham Origins role as Batman and Tony Hale as The Joker.