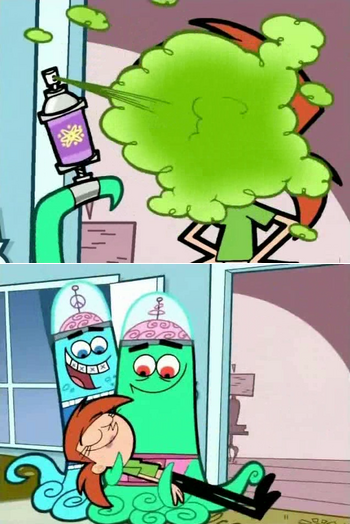 Sweet dreams, Vicky.
Dr. Carmichael: And the guards, how will you manage them?
Root: I won't have to. They'll be incapacitated from the desflurane in the ventilation system. It vaporizes at 75 degrees. Which the building climate control has been programmed to reach ten minutes ago.
— Person of Interest, "Lady Killer"
Advertisement:

In fiction, one of the easiest ways to incapacitate an opponent or group of opponents is to get them in a closed room and pump in Knockout Gas. Some forms of Knockout Gas are an area-effect form of Instant Sedation: as soon as the victims breathe it, they cough weakly a few times and then slump to the floor unconscious. Other forms give the victim enough time to lay down comfortably before falling asleep.

Usually delivered as a visible fog, and often brightly colored as well, but invisible gas is also common, particularly in budget-conscious productions. Knockout Gas can be delivered through special vents just for that purpose, or it can be pumped in through the regular ventilation system. As with other forms of sedation, dosage doesn't seem to matter. The effects last just long enough for maximum tension or drama. Recovery tends to be just as fast as the onset, and the victims rarely suffer any lasting effects beyond, perhaps, a mild headache. Nobody ever seems to crack their skull or otherwise get hurt when falling down, either.

Frequently employed by villains, but also a convenient weapon for heroes due to its non-lethal nature.

Often involves Instant Sedation, and related to One Dose Fits All. Sister Trope to Deadly Gas (and in Real Life, though almost never in fiction, the line between the two can be a very fine one.) Sister Trope to Laughing Gas. Sister Trope to Tranquillizer Dart. Hand Sliding Down the Glass is a subtrope. Often used in a Knockout Ambush. Often results in Non Sequitur, *Thud*.

Though anesthetic and hypnotic gasses of many sorts exist, and are still occasionally used in veterinary medicine,note though "gassing down" is invariably a tactic of last resort, all have the properties of being fairly slow-acting, decidedly dosage-dependent, and fairly easily lethal, unlike the gasses in this trope. Therefore, please refrain from citing real life examples.

Dr Nick Puts Himself To Sleep

While putting Bart to sleep for surgery, Dr Nick Riveria accidentally puts himself to sleep as well.

Dr Nick Puts Himself To Sleep

While putting Bart to sleep for surgery, Dr Nick Riveria accidentally puts himself to sleep as well.