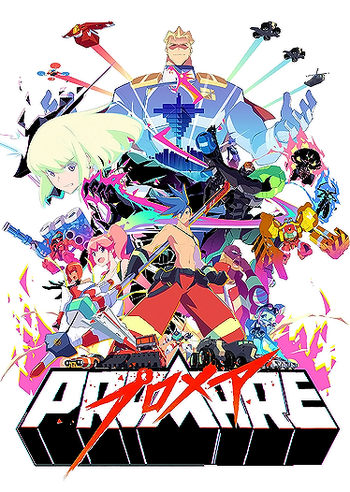 On the Great Flames of the World.
Promare is a Japanese animated feature film co-produced by Studio TRIGGER and mobile game company XFlag, released in Japan on May 24, 2019.
Advertisement:

One day, a mutation suddenly appeared in a portion of the population, turning normal humans into "Burnish" who could generate fire. While these Burnish could learn to control their powers, they still had to burn, and would often discover their mutation in high-casualty explosions triggered by stress. Despite the Burnish only wanting normal, peaceful lives, normal humans quickly came to fear them, and any Burnish-caused fires led to violent government responses and lynchings. Tensions rapidly escalated until the Burnish triggered the Great World Blaze, an apocalyptic event that wiped out half the human population.

Thirty years later, society and technology have adjusted to the existence of the Burnish, but they are still hated and feared, with most preferring to hide their identities. Mad Burnish, a radical group from the days of the Great World Blaze, continues to commit high-profile arson to protest the oppression of the Burnish, spurring the creation of a special firefighting unit named Burning Rescue. After a confrontation with Mad Burnish, Burning Rescue rookie Galo Thymos is forced to examine what drives the Burnish to such extreme methods.