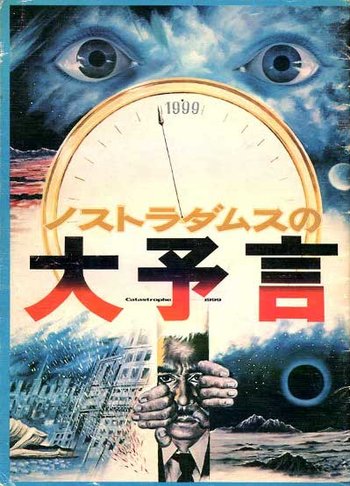 The splendor of beautiful maidens, will never be brilliant again
The hair and the skin will be slowly peeled off
People will go insane, and monsters will stalk the earth...
— Final prophecy, international version
Advertisement:

Prophecies of Nostradamus is a 1974 Japanese science fiction Disaster Movie produced by Toho Co., Ltd., directed by Toshio Masuda, with special effects supervised by Teruyoshi Nakano. The film stars Tetsuro Tamba as Dr. Nishiyama, a scientist whose family has passed down the prophecies of Nostradamus in Japan for generations. In the main narrative, in the years leading up to 1999, innumerable ecological disasters and famines run rampant, before culminating in the destruction of most life itself from a great, final nuclear war. The film also presents a view of the social implications that would arise during such catastrophes. The film has gained a reputable cult status after Toho placed a self-enforced ban on the film after multiple complaints from nuclear disease activists, due to the gruesome depictions of radiation affected humans in the picture.

Was released to U.S. television by UPA in the mid-80s as The Last Days of Planet Earth, a rather messy re-edit of the film that dulled a lot of elements while painting itself as some sort of Nostradamus themed pseudo-documentary.