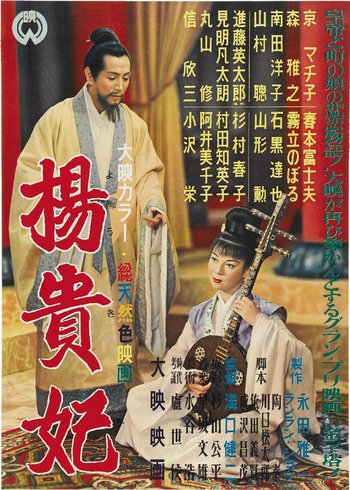 Despite being a Japanese movie it is a Chinese story, telling the Real Life history of 8th century imperial consort Yang Kwei-Fei

of the Tang Dynasty is a widower. He has for some time been deep in mourning for his lost wife, much to the distress of the imperial court, which can't get him to focus on running the country.

The ambitious Yang family is trying to pair the emperor up with a woman as a means of inserting themselves in the court. Family patriarch Yang Guozhong has tossed three sisters from another branch of the Yang clan at Emperor Xuan Zong to no avail. General An Lushan, an ally of the Yang family, notices a fourth sister, Yuahan, born of a different mother. Yuahan (Machiko Kyo) has been left to labor in the Yang kitchens as a servant girl, but An observes both her arresting beauty and her resemblance to the late empress.

Yuahan is sent to the palace. It works, as the emperor falls hopelessly in love with the kind, gentle, selfless Yuahan. He gives her the honorific title of Kwei-Fei, and she becomes his consort. The Yang family is raised in status, with Guozhong becoming chancellor, and An Lushan getting a promotion. Unfortunately, while Kwei-Fei is a devoted servant of the emperor, her relations exploit their power, imposing oppressively high taxes, making themselves hated among the people. Also, An Lushan isn't satisfied with promotion, and wants to become an imperial minister himself. All the political scheming and rivalries threaten to destroy the happiness of the emperor and Kwei-Fei.

One of only two color films made by Mizoguchi before his death from leukemia in 1956.