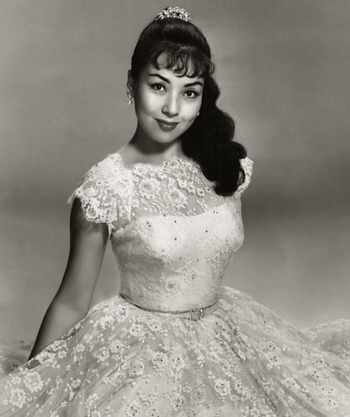 Kyo was born Yano Motoko in Osaka in 1924. She was raised by her mother and grandmother after her father left when she was five years old. After attending dance school she signed with film studio Daiei in 1949. Barely a year after her first film contract, she starred in one of the most famous Japanese films of all time, Akira Kurosawa's Rashomon (1950) as the samurai's wife. Rashomon was one of the first Japanese films to get an international release, winning an honorary Academy Award for Best Foreign Language Film and making international stars of Kyo, Kurosawa, and male lead Toshiro Mifune.

She was one of the first Japanese actresses to be marketed with Fanservice pictorials and cheesecake photos; prior Japanese female film stars had been advertised as demure examples of Yamato Nadeshiko. She starred as Lady Wakasa in 1953 film Ugetsu, another film which got attention worldwide. Her 1953 film Gate of Hell also won an honorary Oscar for foreign-language film. This international exposure won Kyo a starring role as Lotus Blossom in 1956 American film The Teahouse of the August Moon. It was the only film she made in English and a rare example for the era of an Asian actress getting to play an Asian role in Hollywood, as most Asian parts in this era were still done in Yellowface (Marlon Brando appears in Yellowface in the film). Back home in Japan, she played a Streetwalker victimized by American servicemen in Street of Shame. She starred as Sumiko in Yasujiro Ozu's Floating Weeds (1959), which has a place on the Roger Ebert Great Movies List. She frequently played a Geisha.

Kyo's career became more sporadic after the 1960s—her studio, Daiei, folded in 1971—but she kept working in film and television until the year 2000, as well as the stage, where she had her last acting role at the age of 82 in 2006 with an adaptation of Chūshingura.