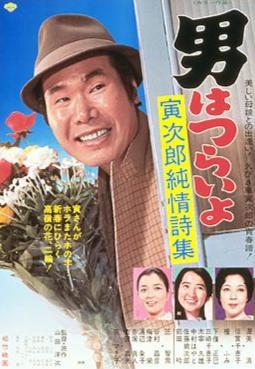 Tora's Pure Love is a 1976 film directed by Yoji Yamada.

Torajirō Kuruma, aka "Tora-san" the vagabond traveling salesman, comes home to his family, all of whom, with the partial exception of his sister Sakura, regard him as a social embarrassment. In this installment Tora's shameless flirting with Masako, his young nephew Mitsuo's twenty-ish schoolteacher, leads to a violent family argument and Tora's departure from the family home. His sister upbraids him for coming on to a younger woman, pointing out that Masako is young enough to be Tora's daughter and it would be more appropriate for him to go out with someone like Masako's mother.

Enter Masako's actual mother, Aya (Machiko Kyo). Aya has just come home after spending three years in hospitals. Aya remembers Tora's family and the candy shop where they still live. She also remembers Tora from when he was younger, and the two of them hit it off. Soon an unlikely romance is blooming between the traveling salesman and the highborn lady—but what neither Tora nor Aya know is that Aya is terminally ill.

This is the 18th of forty-eight films in the "Otoko wa Tsurai yo" or It's Tough Being a Man or "Tora-San" series, all of which starred Kiyoshi Atsumi as Tora-san; the series started in 1969 and ran in Japanese theaters until Atsumi died in 1996.note A 49th tribute film with archival footage of Atsumi was released in 1997. A reboot of the series, starring the actor who played little Mitsuo in this film as a middle-aged man with romantic difficulties of his own, was released in December 2019. It's also the next-to-last film appearance for Machiko Kyo, a star of Japanese cinema going back to Rashomon in 1950.