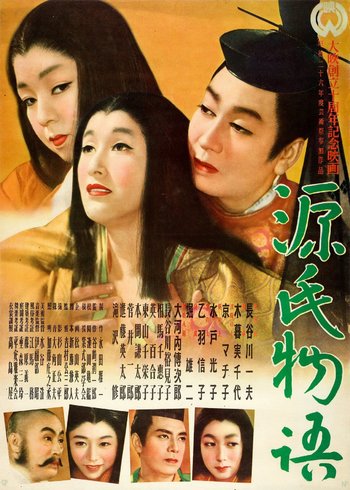 Genji monogatari (The Tale of Genji) is a 1951 film from Japan directed by Kozaburo Yoshimura.

It is an adaptation of The Tale of Genji, the 11th-century novel that is often called the oldest ever novel and is a foundation stone of Japanese literature. Kiritsubo, a concubine of the emperor, is pregnant. But she is just a commoner, and Kokoiden, the emperor's oldest, more high-born concubine (Chieko Higashiyama, who played the grandma in Tokyo Story) is intensely jealous of the beautiful younger woman. Kokoiden is even more jealous when she finds out that Kiritsubo is pregnant. She has the younger woman exiled.

Kiritsubo gives birth to a boy, Hikaru Genji ("Hikaru the Radiant"). Although barred from succession to the throne due to his mother's low birth, Genji is still treated as a prince of the royal house. He grows into a dashingly young handsome man who makes all the ladies-in-waiting excited whenever he passes by. He falls in love with one Fujitsubo, concubine to the emperor, and rapes and impregnates her. But she is pledged to the emperor, so he has to give her up.

Genji marries Lady Aoi, but continues to cat around with other women, much to her displeasure. He more or less kidnaps a teenaged girl, Murasaki, and brings her into his household. Eventually he is forced into exile where he has still more affairs before finally learning some lessons.

Machiko Kyo appears in the last third of the film as Lady Awaji, Genji's last conquest.