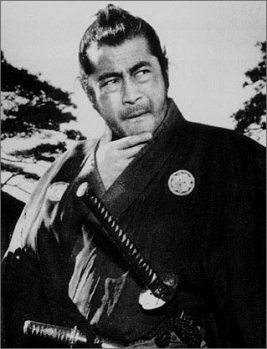 "All you need is one look at Toshiro Mifune to know that he's fucking serious. He's coarse, he's gruff, he's confident, he doesn't take any fucking shit from anyone and he's got the sort of commanding presence that forces you to respect the fact that he could kick your ass fifteen ways from Thursday afternooon and not even break a sweat."
— Badass of the Week

Toshiro Mifune (三船 敏郎, April 1, 1920 – December 24, 1997) was a prolific Japanese actor best known for his numerous collaborations with Akira Kurosawa (e.g Rashomon, Seven Samurai, Throne of Blood, The Hidden Fortress, Yojimbo, Sanjuro and every other movie Kurosawa made between 1948 and 1965 with the exception of Ikiru) as well as many other leading roles. Mifune was to Jidaigeki what Clint Eastwood is to The Western — if there was a badass Samurai character to be played in the 1950s or early 1960s, chances are he was on the short list for it. In particular, his gruff, calculating Rōnin character from Yojimbo was to be the model for Eastwood's "Man with No Name" and numerous other antiheroes.

Mifune and Kurosawa had a falling out in the late 1960s after the filming of Red Beard,note Reportedly Kurosawa insisted on holding Mifune to a contract provision requiring him to grow a natural beard and prohibiting him from shaving it (in case he was needed for re-shoots) throughout the entire lengthy post-production process, effectively preventing Mifune from taking any other acting jobs for two whole years at the peak of his fame and nearly bankrupting him. and after that Mifune began popping up occasionally in Western film productions such as Grand Prix and Hell in the Pacific. This eventually culminated in Mifune appearing in the American miniseries Shogun (as the resident Magnificent Bastard, Toranaga), resulting in acclaim stateside but criticism in Japan due to the lack of historical accuracy. If George Lucas would have had his way instead of being told by higher ups to hire a well-known (to Western audiences) actor for the role note There are also claims that Fox was hesitant to use Mifune due to his English being difficult to understand, necessitating his lines to be dubbed; other claims say it was because he wasn't available. Mifune's daughter Mika, an actress in her own right, says

he himself turned down the role. , Mifune would have played Obi-Wan Kenobi in Star Wars.note The Soul Series' Mitsurugi, an Expy of Mifune, was Kenobi. Or at least, his Japanese voice was. He was also offered the role of Darth Vader, but turned it down as his face would have been covered by a mask. Of course, he later regretted turning down the roles, which could have allowed him to define the nature of the Jedi in that landmark film franchise and cultural touchstone.

In between 1993 and 1997, Kurosawa and Mifune had a few meetings with one another at funerals and award ceremonies, most notably at the 1993 funeral of their mutual friend, Godzilla director Ishir⁠ō Honda. It seemed that their relationship had begun to repair itself. Rumor had it that they would collaborate once more, but Mifune died in 1997 and Kurosawa a year after him. It's said that Mifune actually succumbed to Death by Despair: his health had been really bad after a stress-triggered heart attack, but his ex-wife Sachiko Yoshimine was helping him overcome it, and when she suddenly died of cancer his physical and mental state took a nosedive and he simply lost the will to live.

According to legend, Mifune's career was an accident. Toshiro Mifune needed work, and a friend told him that the studio was hiring maintenance men. When he got there, he stepped into the wrong line and wound up at auditions. Mifune was known to be a real darling to the crew, frequently sharing food with them and helping them out with errands during production, partly because he was aware how unplanned and accidental his own career was as an actor.