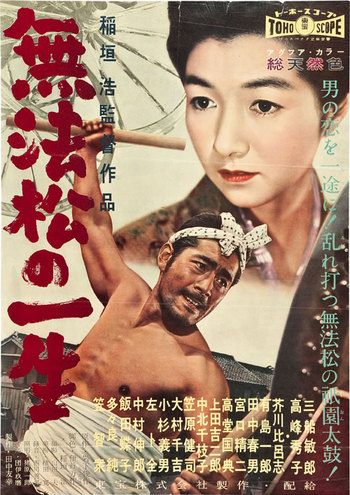 The Rickshaw Man is a 1958 film from Japan, directed by Hiroshi Inagaki.

It is set in the town of Kokura on Kyushu, in 1897 and for a couple decades afterward. Matsugoro (Toshiro Mifune) is a rickshaw man, a humble illiterate laborer who is nonetheless boisterous and full of life. One day he sees a small boy, Toshio, who is crying after he fell out of a tree. He whisks the boy home and thence, at the request of Toshio's mother Yoshika (Hideko Takamine), to a doctor. The boy isn't seriously injured but Matsugoro earns the gratitude of beautiful Yoshiko and her husband, Capt. Yoshioka, an officer in the army.

Out of nowhere, Capt. Yoshioka contracts a fever and dies, leaving Yoshiko a widow. The cheerful Matsugoro offers to help Yoshiko raise her boy. Yoshiko gratefully accepts, but as the decades roll by she continues to regard Matsugoro as a faithful servant, unaware of the feelings he has for her.