Film / Hell in the Pacific 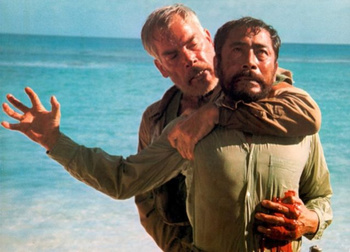 "Two wartime enemies with one chance for survival ... each other."
Advertisement:

During World War II, Japanese naval officer Captain Tsuruhiko Kuroda (Mifune) is stranded on a remote island in the Pacific Ocean. He soon discovers a loudmouthed American pilot (Marvin) who has crashed his plane. Unable to communicate verbally, the two enemies initially taunt each other and refuse to cooperate. But when they begin to face starvation, dehydration and exhaustion, they are forced to put aside their differences and rely on one another for survival.

The film contains these tropes: