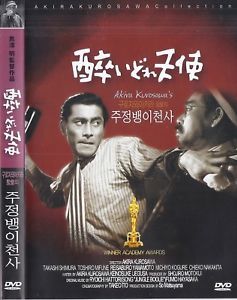 "Martyrdom is out of style."
— Dr. Sanada
Advertisement:

A small-time doctor with an alcohol problem and a tough, swaggering young yakuza living in dirty, decaying post-war Tokyo form an uneasy friendship after the latter learns he is suffering from tuberculosis. Dr. Sanada (Takashi Shimura), who discovers the disease after a chance discussion with Matsunaga (Toshiro Mifune), refuses to leave the violence-prone gangster alone and pesters him to accept treatment. Meanwhile, the young woman who lives with the doctor worries about her ex-lover Okada returning from jail to take her back.

Drunken Angel (1948) was the first of 16 film collaborations between director Akira Kurosawa and actor Toshiro Mifune, who had his first major film role as Matsunaga. Although not his first ever on-screen role, it is credited with kick-starting his career as well as that of Kurosawa. His co-star Takashi Shimura is known for having starred in many of Kurosawa's other works including Stray Dog, Rashomon, Yojimbo and Sanjuro. Drunken Angel has also been referred to as the first post-war Japanese film to feature a yakuza character.