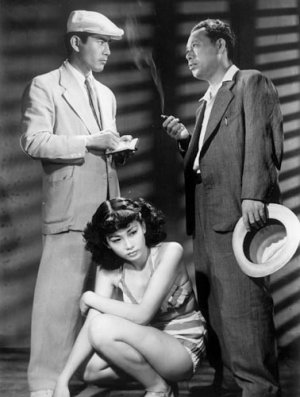 ”A stray dog sees only what it chases”
—Detective Sato
Advertisement:

Murakami, a rookie homicide cop (Mifune), has his pistol stolen from him by a pickpocket on a crowded Tokyo trolley. The plot follows Murakami in his efforts to track down and find the stolen gun. He's helped in his search by Sato, a more experienced detective (Takashi Shimura), but he's also wracked by guilt because the gun has been used to commit crimes.

One of the first films to deal with the "older detective trains younger detective" plot you can see in films like Se7en or Training Day.

No relation with the manga.