Film / The Life of Oharu 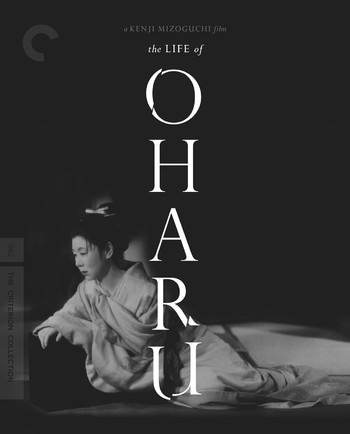 The Life of Oharu (西鶴一代女) is a 1952 film from Japan directed by Kenji Mizoguchi.

Oharu (Mizoguchi regular Kinuyo Tanaka) is a woman of noble birth, daughter of a samurai who is a member of the imperial household. She falls in love with Katsunosuke, a page (Toshiro Mifune, in a surprisingly small part since he was already a huge star). They are caught together while having a tryst, a tragic event that triggers an unending series of disasters for the rest of Oharu's life. Her boyfriend is executed, but she and her family are kicked out of the royal court and exiled from Kyoto forever. Her father, who now sees her exclusively as a commodity, sells her as a concubine to Lord Matsudaira, who needs an heir and whose wife is barren. Oharu bears him a son, but his wife's jealousy results in Oharu being cruelly booted from the lord's household. Things go From Bad to Worse as Oharu, who now has a reputation as a loose woman, starts sliding down the sex-worker ladder, her life an unending series of misery and pain.

So if you want a Happy Ending, look elsewhere.